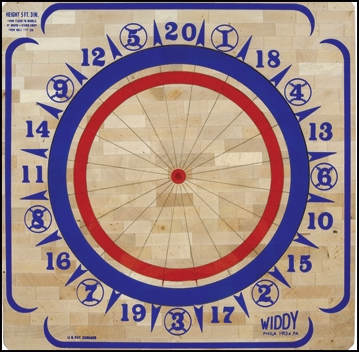 Baseball is the common game played on an American dartboard. This is the game played at all of the top tournaments, and all of the dart leagues. If you look at the dartboard on the right, you can even see the innings of the game have a baseball symbol on them, that's how popular the game is.

Players (or one player representing a team) shoot one dart at the cork (the 'bullseye' in pub darts) to see who goes first. The player closest to the cork has the choice of going first or second. If the first player hits a cork, and the second player hits a cork (he is said to "top" it), whoever tops the cork chooses.

Often the game of baseball is played in three game sets. Loser of the first game gets choice of position going into the second game. The third game, if necessary, is once again decided by throwing the cork.

Something to note here is that during the cork shot, according to the ABDA Rules on the subject, the shooter does get to pick up the dart and shoot again.

When sharing the same set of darts (and this is common), a player throws his darts, and the next shooter walks up to the board, calls the points, and then removes the darts.

When the first inning is completed, players shoot the second inning, and so on, until they've shot all nine innings.

If the score is tied at the end of nine innings, the game is decided by playing extra innings (starting with the tenth), until someone wins.

Results from past years:
© AmericanStyleDarts.com All rights reserved. | Design: HTML5 UP